There is a reason that folks reach a certain age and hang it up.  No doubt, in the business of policing, it is related to a host of factors, visual acuity, strength, stamina, you know…the usual stuff.  It is the same thing that limits a professional athlete to 10 or so years before he or she is worn out and relegated to the boredom associated with spending some of their considerable fortune.  Thankfully, very few retired law enforcement officers are faced with the prospect of losing sleep over seismic shifts in the stock market…….

I suspect that most of us who have made a career out of policing, in one form or another, can look back with satisfaction in having made a difference in the world we were charged with serving.  We understood the expectations.  We correctly, for the most part, read the folks we dealt with appropriately and applied just the right amount of logic, persuasion and inference to accomplish our goal which was to restore dignity to an undignified situation.  We were schooled in the fine art of winning, an absolute necessity when losing often carried unthinkable consequences.  We relied upon a slapper, stick or backhand when the circumstances were such that our verbal skills were just not getting it done, or when the folks who had attracted our attention in the first place narrowed our options with their behavior.  I recall a fellow trooper, an academy classmate actually, who was confronted by a big, loud, drunk and provocative cowboy at the state fair.  The cowboy announced to the world, and his audience was considerable, that he was going to whip this officers ass (not his donkey…) and the officer replying “well, okay but you are not going to like this”.  The cowboy made a bad decision and was soon cuffed and on his way to jail……I never saw this fellow again and trust he recovered from his broken nose and what appeared to be a dislocated shoulder…the results of said trooper relying on certain compliance techniques popular in our day.  The times have changed…..and our generation would likely get into trouble rather quickly……..

A mob of mannerless thugs blocking a street in our day would be met with a mob of officers equally passionate about unblocking the street.  We would win and a few folks would get hurt.  I can guarantee the thugs would regroup and rethink their decision to block another road.  Today, our officers are instructed to remove their campaign hats at a civil disturbance, so as to appear less imposing and intimidating.  My generation would not have been concerned with the sensitivities of folks intent on burning  and looting.  Again, folks would have likely been bruised up, but they would probably sit out the next riot…..or “rally” as one news organization referred to the stooges who are protesting the presidential election as.

Could I survive in today’s police climate?  Yes and no.  I am not as quick and certainly not as strong as I once was…..and quick and strong are great attributes for an officer.  I could certainly function as an administrator again, but would likely quickly fall into disfavor with the political leadership today when I backed my officers who applied a little more force than the pol thought necessary to resolve a situation.  The cameras, cell phones and kinder and gentler approach so popular today may well be reflective of the desires of the society we protect, however; it is not working folks. The torch has been passed to the new Centurions and these highly trained and better educated officers are being killed at an unprecedented rate.  My sage Sergeant, back in the day, insisted we meet people just one notch above the terms they establish….with the understanding that if they insisted, we could quickly adjust to the circumstance and slip one notch below their expectations………..see the cowboy story above. 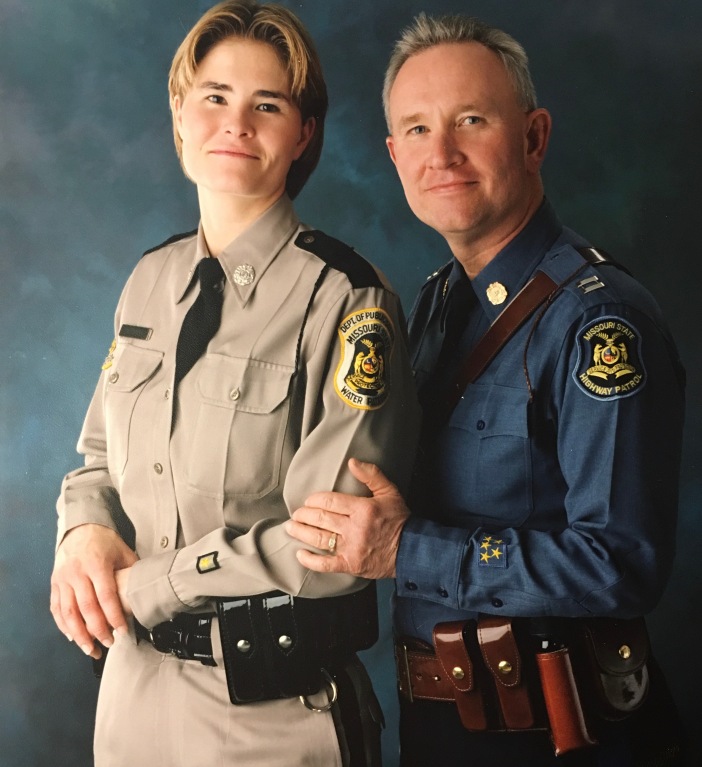 This picture was taken on the last day I wore a uniform.  It reflects the passing of the torch to the next generation.  I am proud of my daughter’s commitment and style…..consistent with the expectations we have established for our profession, however……..

I would love to have the torch back………….