Memorial Day is a day we set aside in remembrance of those men and women who have died in the service of our country while members of the Armed Forces. This seems simple enough, on it’s face, but have you ever really considered the implications associated with dying in combat? Probably not, so I thought I would offer an observation or two about this business. 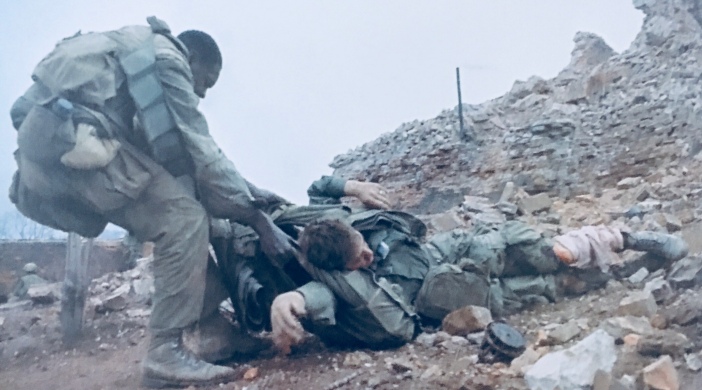 Since this country’s founding in 1776, America has been at war an astounding 90 or so percent of the time! A careful look at our history reveals that we have never gone a decade without a war, declared or not. The socio-economic reasoning that goes into the decision to fight is complex and scholars are sharply divided on the causes and benefits of war. Suffice to say, there appears to be little reason to expect this history to change direction in the foreseeable future. Armed conflict is a part of our culture, and as such, results in the deaths of combatants on both sides of the fight. It is these combatants that we recognize on this special day of remembrance.

General S.L.A Marshall, one of America’s preeminent military leaders, observed during WWII, that during hard combat, only 15 to 20 percent of our troops fired directly at an exposed enemy soldier. Instead, our soldiers preferred the use of key weapons that could kill indiscriminately such as flame throwers, machine guns and the like. The percentage of troops firing directly on an exposed enemy combatant rose dramatically when a superior, close at hand, ordered the firing. Human behaviorists attribute this phenomenon to the incredible fear that human beings in combat feel when first engaging the enemy. This fear is courtesy of the fore-brain that distinguishes us as humans. This fear is then replaced with reasoning from the mid-brain, that causes us to reflexively resist the concept of killing another human being. General Marshall’s observations, first viewed with skepticism, have been confirmed by virtually every study since being revealed. Coincidently, early FBI studies of police combat shooting engagements seemed to confirm these findings. It was clear that behavioral modification would be necessary to overcome this tendency to not kill directly. Our military adapted quickly and the numbers began an evolution of significant proportions.

As a result of training modifications, the numbers of soldiers who fired directly at an enemy combatant increased to better than 50% during the Korean War and an incredible 95% of troops involved in ground fighting in Vietnam. Once again, coincidently, the rates of engagement among our police officers also saw a dramatic increase, presumably as a result of modifications in training designed to set aside the mental exercises that tended to preclude lethal force against another human being. (As a side note, the increase in numbers of soldiers directly and lethally engaging an enemy soldier in Vietnam is marked by a correspondingly significant increase in the numbers of PTSD afflicted soldiers coming out of that war. This is presumably the result of over-riding the human tendency to avoid killing our own species.). Those who seek to destroy us have also evolved in the mechanics of killing, make no mistake.

How does this impact our day of remembrance? While there are a number of conclusions that can be drawn from this overview, the following observations are all but guaranteed. America is quite likely to be perpetually involved in a war of sorts somewhere. Wars always produce casualties thus providing generation upon generation of Americans who will die in the name of our great country, and be honored on Memorial Day. Although the mechanics of warfare have evolved tremendously with the introduction of unmanned drones and lethality from great distances, boots on the ground will always be necessary to protect the gains made in combat. Shooting directly at another human being is a very big deal, unless you are a sociopath, and will impact your psyche for the rest of your life. It takes excellent training and unbelievable courage to engage another human being in a competition that is sure to result in the death of one of you. We are the greatest nation in the history of this earth, because men and women have risen to the occasion and risked their very existence to guarantee our continued success.

As cruel, cold and seemingly calculated that it may seem, there is a very high probability that many more Americans will die protecting our life and culture in a world where our influence, wealth and military might is the envy of virtually every other country in existence. Were it not for the grace of the Almighty, every one of us who has served on a battlefield might today simply be a name on a stone or plaque someplace in our land.

May God richly bless those who have died in the interest of America, and may we never forget them.

2 thoughts on “About Memorial Day….”