Every journalist in America will offer commentary about the void left with the death of Charles Krauthammer. I sincerely hope they were able to convey their admiration to him prior to his passing, as we in America are fond of praising folks when they can no longer benefit from the praise that all folks need from time to time. My point here is that I am not Brokaw, Wallace or Bret Baier, the voices of America, rather an I am an ordinary guy who deeply respected Charles and his mastery of effective communication. I am struck by the reality that we have lost this man when we need him more than ever. 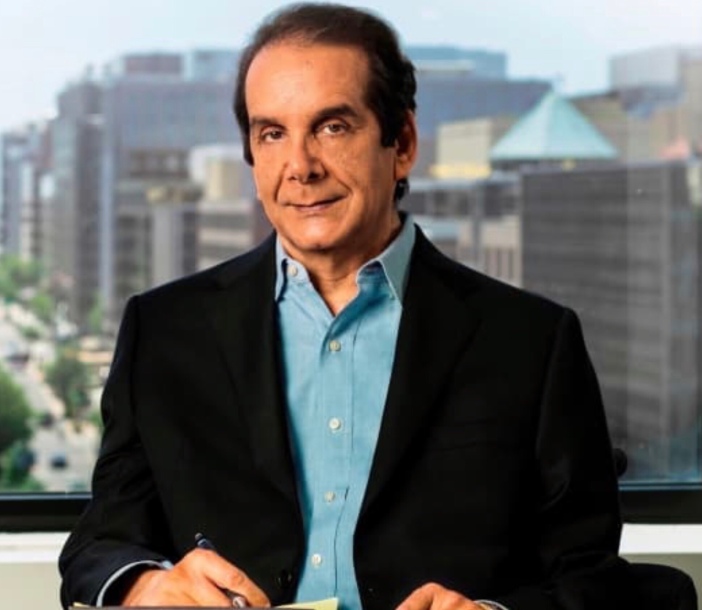 There are a number of reasons that we needed this gentle man. At the top of my list is his unflappable calm, even when righteous indignation was boiling within him. He would occasionally utter a mildly profane expletive, carefully timed and always appropriately placed in his commentary. With our political leadership, of every persuasion, hurling profanities and insults right and left, Charles could offer a point quietly and far more effectively by simply backing the point with reason and a beguiling sort of calmness. This calmness, presumably, is the result of a computer like quickness to dissect an issue and expound on it at length. This attribute played nicely with ordinary people who most often take considerably more time to process the information at hand.

Charles Krauthammer had no spin in him. He was an advocate for the truth, no matter where the facts took him. How many newscasts leave us wondering where the truth is? Ordinary Americans need those precious few individuals who are moved by clean, factual information that needs no more qualification than a simple “Krauthammer said….”. The media, today, is an unmitigated disaster comprised of lies, spin and agendas. Charles stood in sharp contrast to most of the talking heads we see today, who apparently believe we listen to and trust them. We don’t. With rare exception, when a commentator is finished, we scratch our heads at their outright lack of regard for our ability to digest their offerings, looking for the glimmer of truth that is often hidden deep in their pronouncements. Not so with Charles, who prided himself on the truth as the foundation of his messaging. Simply put, Charles was an honest man, who pushed an unvarnished message with nearly righteous overtones.

Americans love a winner. When life dealt Charles it’s harshest terms, he soldiered on. He understood the profound impact of the devastating injury that left him paralyzed, looked it in the face and beat the hell out of it by turning this adversity into opportunity. We deeply admire people who can, as the saying goes, “make lemonade out of lemons”. His commitment to maximizing his purpose on the face of this earth is both refreshing and encouraging to ordinary Americans who must deal with adversity daily. Charles, by virtue of his intellect and accomplishments, feared little in life. Perhaps these qualities were the genesis of his fearless assault, always with class, on anyone who needed to be called out for their deviation from the truth. Charles Krauthammer was a winner worthy of the admiration of folks from every conceivable walk of life. People who have earned this respect are in short supply……..

Ordinary people are in awe of folks who are bold enough to offer an opinion in the public venue and smile knowingly when challenged by those who do not agree with them. It was my custom when watching Charles, sitting on a panel of journalists, to sit up and listen carefully when a fellow panelist would challenge him. The challenger had to know they were going to be met with reason, fact and a soft rebuttal that would carry the point. Charles did not respond with anger, was never defensive and would graciously concede a point if it was cloaked in sincerity and truth. He was also content to let his point hang, knowing that he was on firm ground and most likely would be affirmed in the days to come.

As a final note, Charles understood the incredible power of American politicians. He once remarked the Department of Justice would see a snowstorm in hell before Hillary Clinton would be prosecuted. Charles would look you squarely in the eye and tell you, with absolute confidence, her immunity from prosecution emanated from her political stature and had nothing to do with her presumed innocence or guilt. Americans need to hear from people who understand this incredible power and can break this axiom down into terms we can wrap our arms around.

Charles Krauthammer was a great communicator, perhaps one of the greatest in many generations. His credibility was virtually unassailable and few in the public eye can say that. Ordinary people, like me, needed Charles to sort it all out. His passing has relegated the conveyance of truth to those left to carry on. My guess is that few will ever be able to do so with his integrity and wit. One of our hero’s is gone, you can believe that.