The decision was made as I sat on stacked boxes of 105mm artillery rounds, on a Fire Support Base named Gary Owen, located about halfway between Saigon and the Cambodian border, in Vietnam. The son of an Army officer, I had left college in Kansas City rather unceremoniously to enlist, thoroughly disgusted with the antics of my fellow students protesting our involvement in this war. I wore my hair short, tucked my shirt-tail in and was respectful to those around me, particularly those in positions of authority. A structured existence was the epicenter of my comfort zone as I contemplated my life after this war. I decided on law enforcement and narrowed my preferences to two agencies that I deeply respected, the Kansas City Police Department and the Missouri Highway Patrol. The unrest in Kansas City was the deciding factor, I would join the Highway Patrol.

In those days, there were many folks interested in this job, and the selection process was designed to weed out folks who were simply job hunting as opposed to those who had a burning desire to become troopers. The academy delivered all the structure you could possibly stand which provided a bit of an advantage to the sizable contingent of military veterans that populated our class. It was a galvanizing experience that finally culminated in donning the full uniform for the first time as we were sworn into an organization steeped in tradition with a proud history dating back to 1931. In 1931, the concept of a state police organization enjoyed broad public support as well as the support of Gov. Henry Caulfield, Attorney General Stratton Shartel, the Highway Commission, the Missouri Automobile Association and the Missouri Banker’s Association. Organized labor, fearing a strike breaking presence as well as a number of sheriffs were concerned with the formation of a statewide police agency. In 1931, jobs were scarce and approximately 5,000 applicants applied for appointment to one of 55 positions, which included 6 Captains. Appropriations were secured for the purchase of 36 Ford Model A roadsters, 1 Ford sedan, 1 Oldsmobile, 1 Buick sedan, 3 Chevrolet sedans, 12 Harley Davidson, 3 Indian and 2 Henderson motorcycles. Of interest, the Model A’s each cost 413.18. These early troopers were a hardy lot, ordered to drive about the countryside with the tops down on the roadsters, notwithstanding pouring rain or heavy snow, so the public might recognize their presence, further enhanced by the 12 hour days each officer worked. What did these fellows accomplish? In their first year, they made over 3,800 arrests and recovered 381 stolen cars. These officers arrested 14 men for bank robbery and cleared a number of murders. For these efforts, these officers were rewarded in 1933 with a salary decrease from $145.00 a month to $130.00 a month. These early officers began establishing a legacy on day one that endures to this day, that of service as opposed to personal wealth. Personal wealth is not the reason that men and women enter the uniformed services. ( In 1972, when I joined the Highway Patrol, we insured our own Patrol cars by securing a DOC rider on our personal cars…….yes we insured our own patrol cars!)

State Police organizations have evolved tremendously. The advances in technology and communication capability have resulted in commensurate advances in the efficiency of police operations. These tremendous advances have not, however, replaced the necessity to interact with the citizenry that we protect. The core principle of policing has remained the same since the first officer was commissioned in New York in the 1800s. Police officers lend dignity to the otherwise chaotic nature of a free and open society. Although there are many roles within this profession that require a non-uniformed approach, the uniform generally announces the presence of police authority without the necessity of a spoken word. The Missouri Highway Patrol Uniform was patterned after the uniforms of the New Jersey State Police in 1931. Today’s uniform is certainly more utilitarian than in years past, but essentially remains unchanged. The photograph below is of retired Captain Ernie Raub wearing a 1937 Highway Patrol Uniform. The jacket, or blouse, while very striking in appearance is essentially a straight jacket. When I became a trooper, these blouses were still worn during the winter months, an entirely unforgettable experience! Also note the antiquated swivel holster, something that I lobbied against tirelessly while teaching officers the art of handgun retention. The breeches and boots, while sharp were not practical nor particularly comfortable, but were utilitarian to officers assigned to motorcycle duty. In the first years of my service, our uniforms were custom tailored and relatively expensive, however the Patrol did provide funding that did little more than cover the expense of dry cleaning these uniforms! 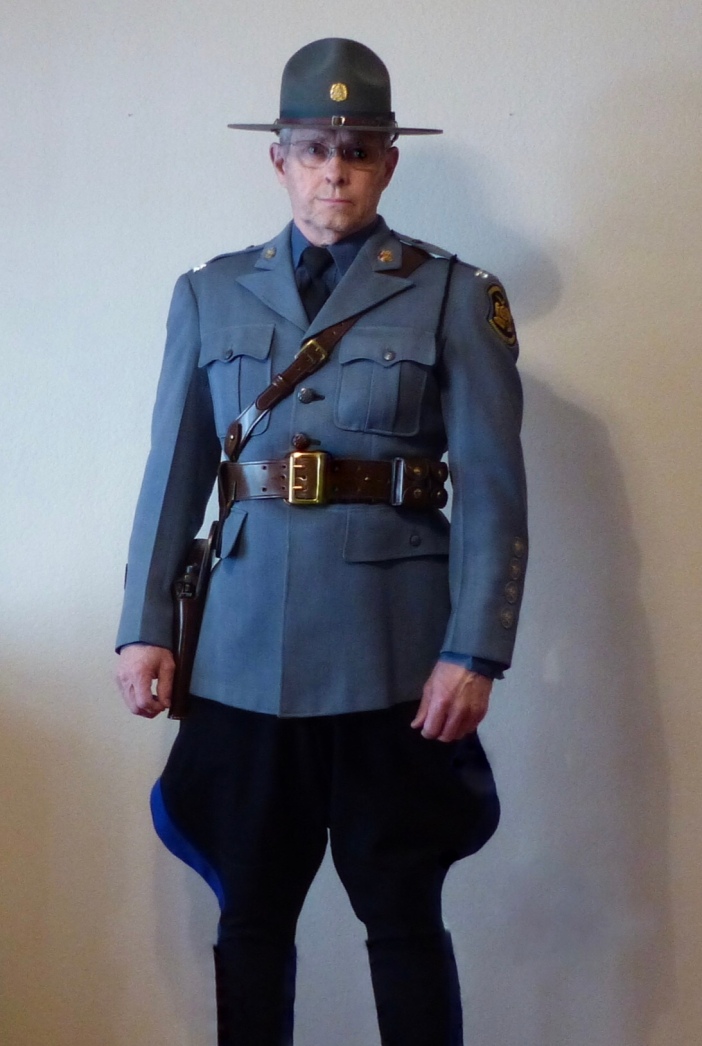 I am often asked, would I do it again, referring to my career with the Patrol. My answer is an enthusiastic yes. I served with a host of characters called to this unique profession, each contributing to the aforementioned task of lending dignity to undignified happenings. My daughter is a trooper and I am very proud of her service in a time that is much different than when I worked our streets and highways. The diminishing respect for authority and creeping lack of self discipline is deeply troubling and presents a new challenge to our officers today. As I write, many outstanding officers are at work, writing new chapters in the legacy of the Patrol. These officers are linked to the past by tradition…and the french blue of the uniforms they wear.