Yesterday, my 70th birthday, I was honored with the privilege of eulogizing a friend who had succumbed to a massive stroke while sowing seed in a food plot, taking care of critters that had formed the basis of his professional existence as a veterinarian for many, many years. As I sat in the sanctuary, waiting to speak, it occurred to me that our last conversation was about firearms and life afield. More about that later.

Dr. Jerry Robertson was a big guy, well suited to the rigors of a rural, veterinary practice. He was, at once, soft spoken and boisterous, brilliant and uncomplicated, humorous and serious about the practice of medicine. He had a choice early in life, medical school or veterinary school and chose to be closer to the land he loved. It was at it should be, the Robertson name was descended from the ancient Hebrides Islands off the west coast of Ireland where tending flocks of sheep and herds of cattle was paramount.

I have always had tremendous respect for veterinarians. I suppose this respect was honed in a conversation with a very wise Patrol Zone Sergeant, a Dutchman named Plymell, who was cattle rancher as well as trooper. He advised that if you could at all possibly do so, avoid arresting your mother, a good neighbor, the local veterinarian and your preacher. He went on to say you will desperately need each one of them at some point. In reality, they are all gifts from the Master.

What about this man we called Doc? He was the patriarch of what I have formally christened Clan Robertson, fitting given the origin of the name. I sat with the family a few nights ago hoping to gain insight into this beautiful blended family and the good doctor. A few bottles of wine set the tone and I became fascinated by the stories and life in this tight clan. I can assure the reader they are brutally and humorously honest with each other, share secrets easily and were universal in their love for Doc and each other. Like good clans tend to be, when they circle the wagons to confront external threats to the clan, it would be wise to drop your challenge and back away. It was a wonderful experience with a group of bright, energized folks who have gravitated to various vocational specialties to which they handle with the precision of the Patriarch. The stories were many, some ribald as might be expected and repeated in Church after begging the forgiveness of the pastor. Doc would have wanted it that way. To illustrate his life, I relied on a worn out pair of Doc’s hunting boots as a prop. You see, boots, like their wearers, are term limited but hard to let go of in the end. This photo is of the family floral arrangement, one of the most beautiful I have ever seen. 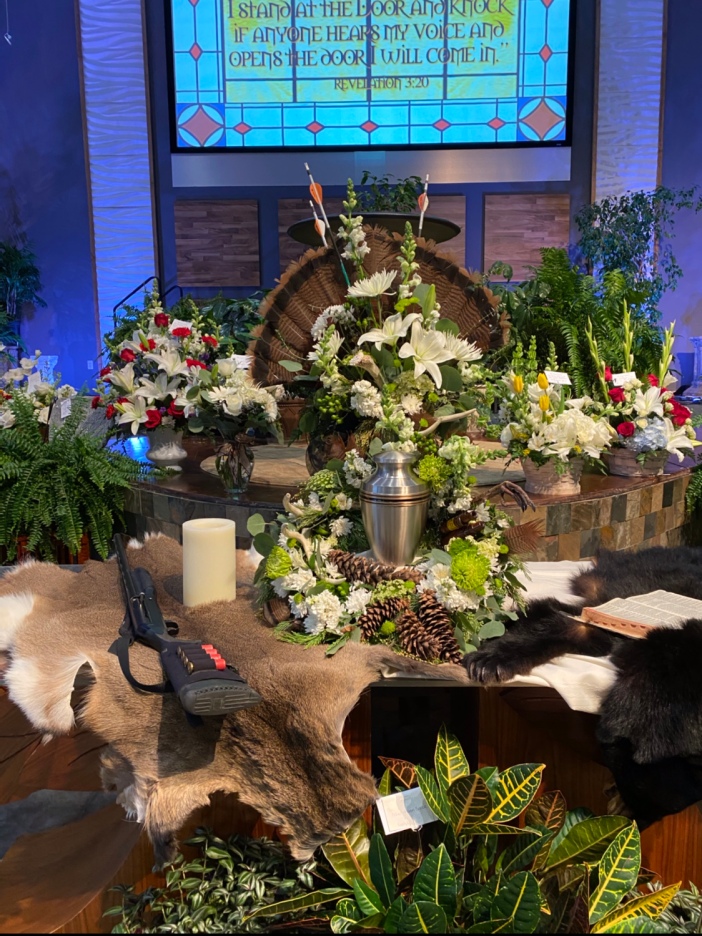 Doc, among his many talents was a teacher. Field dressing a critter presented the opportunity to enlighten anyone within earshot concerning the anatomy of the animal. He was a man of science with an equal measure of appreciation for nature, in all it’s forms, built in. He was adept with firearms and saw the absolute value in the 2d Amendment. As bright as he was, he could not understand the hysteria over guns that is sweeping our country. Perhaps his greatest talent was his ability to weave a story. As the preacher noted, with Doc, a story had a beginning, a long middle and, well, the end was hard to discern as he was exceedingly clever at seamlessly transitioning from one story to the next.

I remember our last conversation, centered around the merits of various handguns and calibers, hunts and fishing. Doc sat stiffly, plagued by a back tortured by his early, large animal practice, as we talked. In spite of the pain, he painted a picture of a great hunt, and easily slipped into a conversation about Truman Lake crappie, a shared passion. As often happens, I had no idea it would be our last. I am saddened that I did not spend more time with Doc, as he had much to say and I much to learn from this masterful man. I implore you to not make the mistake of conversations with friends on an as needed basis. Every conversation may be the last and your regrets will accumulate. Doc Robertson was a treasure, leaving Clan Robertson to carry on the traditions of the family. He touched many lives and lives on in memory. I used an Ancient Indian Proverb to illustrate the doctor’s understanding of nature:

The trick is to make them recent……..