Predictably, it is on.  The horrible shooting in Florida has evoked commentary from many folks who know a lot about a lot of  things and from folks who know very little about anything.  In our wonderful democracy, the folks who are oblivious each have a vote and their handiwork is evident.  The crusade against gun ownership in America is unabated……fed by a Chief Executive who desperately needs a legacy.

There is little need to weigh in on what constitutes an “assault rifle”.  Progressives love this description.  It is easy to say, catchy and takes little room on a printed page.  To folks who know very little about anything, they are typically black, polymer stocked and semi-automatic in operation.  They may be green, camo or brown, are usually compact and have far too many buttons, levers and rails for the numb minds of those who hate them to operate.  They come in a wide range of weights and calibers.  The incredibly successful 10-22 from Ruger, with it’s rotary magazine and self loading action, qualifies.  Folks who rail against black rifles remind me of people who come home and kick the dog because they had a flat on the way home.  The dog didn’t cause the flat and black rifles are not fueling homicidal rage…..

During the Vietnam War, the Viet-Cong and North Vietnamese Army or NVA, placed a bounty on our most prolific sniper, Gunnery Sergeant Carlos Hathcock, also known as “White Feather” to the bad guys, so named because he was fond of keeping a white feather in his bush hat brim.  The bounty, $30,000.00 U.S., was exceedingly high for the bad guys. Sgt Hathcock, had 93 confirmed kills as a sniper and as many as 300 unconfirmed kills, the difference being in the documentation of each kill.  The Gunny was a native of Arkansas and learned  to hunt and shoot with a JC Higgins .22 while visiting relatives in Mississippi.  Folks, he was good…….and was never fond of the killing part of his job.  His motivations centered around keeping his fellow Marines alive and matching wits with his opponents in this deadly business.  His rifle of choice?  The venerable Model 70 Winchester, of which hundreds of thousands have been sold as a sporting arm world wide.  It had a heavy barrel and he relied on match grade ammunition to deliver the accuracy inherent to his trade. The Viet-Cong did not place a bounty on his rifle…….rather the man behind the rifle.  To them, it wasn’t “gun control” …….and these were folks who ran around toting Ak-47s and wearing tire tread sandals.  They understood that if you incapacitated the shooter, the rifle mattered not.  We can learn from them. 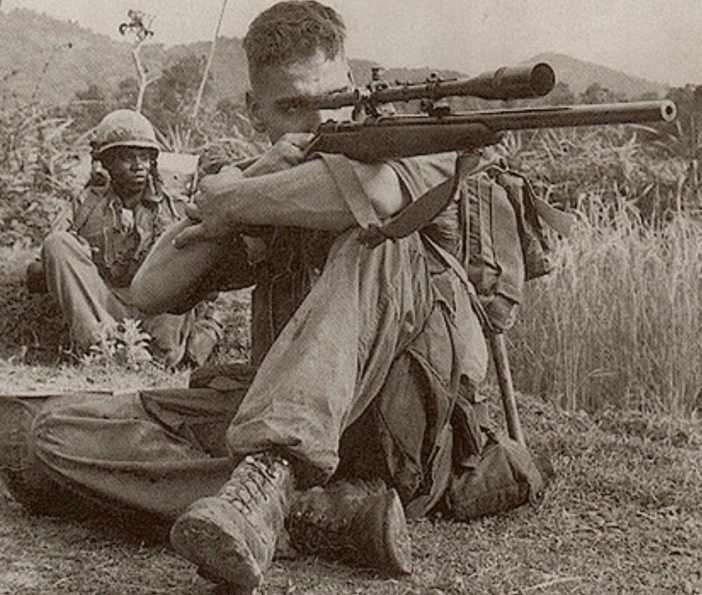 Ernest Hemingway wrote, “Certainly there is no hunting like the hunting of man, and those who have hunted armed men long enough and like it, never care for anything else thereafter.”  The point is, firearms are cold, tangible pieces of equipment and people are not.  This makes them logical targets for those who do not care to be bothered by the tedious task of fathoming the motivations and psychology of killers.  The mass murderers we have seen over the past few years are sick, deranged folks who thrive in an open democracy like ours.  Their motivations vary dramatically and they are exceedingly difficult to ferret out before their sprees.

The Viet-Cong got it.  Put the emphasis on the shooter, not the gun.

(Tomorrow, I tackle the gun industry in a piece titled “Don’t Feed The Bears”)

2 thoughts on “Black Rifles and Stupidity…..”