I don’t belong to many organized groups, clubs or teams these days. High School baseball sufficed to assuage my need to belong to something, a pastime that rewarded me with a number of terrific memories and laughable experiences. I gave passing thought to football, but passed on the opportunity to serve as a tackling dummy for the big guys that populated Waynesville in those days, which didn’t seem like a good plan. Then came the big one. At the AFEES center in Kansas City, (Induction Center), I raised my right hand and “joined” the US Army. My generation was among the last to enjoy “old Style” basic training, where you were greeted by a Drill Sergeant that had everything on his mind other than your comfort. This experience, alone, makes a great case for not joining things.

As time passed, I joined a bowling team or two and played organized softball in a town league with an occasional church league and police league thrown in to add color to my existence. At one time or another, I joined an Optimist Club and became a Rotarian, both were rewarding and not terribly taxing in terms of commitment. By the time these opportunities had presented themselves, I had already “joined” what was to become the ultimate, for me, organization, the Highway Patrol. The commitment here was substantial and tremendously rewarding, and I look back with no regret and many terrific memories. The camaraderie within a state police organization must be experienced to be understood. Your obligation to the community you serve and the officers you serve with is absolute in nature. External threats are met with a closed ranked response, a fact that helps guarantee your continued existence in a world that increasingly views police line of duty death as a routine happening. The common thread here is a uniform, a distinctive, binding indication of membership in something, whether it be a ball team, military organization or police force. Stay with me, we’re getting close to the Hogles Creek Jigmasters, another uniformed organization that involves allegiance and obligation by it’s members.

For many years, I have referred to myself as a fisherman. I have always loved to fish and seldom missed an opportunity to do so, whether it be from a pond bank or high speed bass boat, with a healthy dose of wade fishing for trout or pan fish thrown in when that opportunity presented itself. One of my fishing buddies, another Highway Patrolman named Lee Plunkett, and I joined forces in a local Jefferson City bass club where we found ourselves fishing competitively against local “good old boys” who grew up on the river giving our club it’s name, “The Osage River Bassmasters”. Surprisingly, we held our own, managing to win or place in a couple of river tournaments. We were always tough on Truman Lake, which is challenging if you have not spent a lot of time solving it’s many mysteries. Truman Lake will always be my “home” water, a huge reservoir that is full of fish, but requires hours of fishing time to solve. Gradually, my fishing emphasis shifted from the pursuit of bass to the pursuit of crappie, an angling treasure that rewards the successful fisherman with not only the thrill of the catch, but also a deep fried culinary experience that cannot be beat. One sunny afternoon, with a basket of nice crappie in the boat, it occurred to me that a great concept would be the combination of fishing with my propensity to wear a uniform and belong to something. Thus was born the Hogles Creek Jigmasters, a very exclusive organization of dedicated crappie fishermen who shared a love for the mighty crappie, the thrill of crappie tournament fishing and the rewarding nature of membership in an exclusive group. 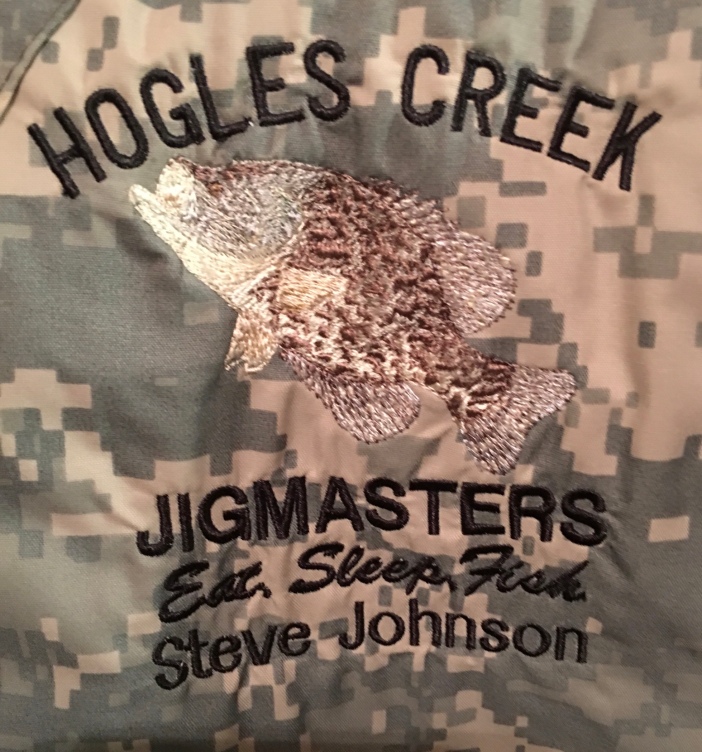 The standards for membership proved to be extraordinarily high. The jacket logo, pictured here, was to our members, as exclusive as the green coat at a certain golf tournament. Our membership committee worked in absolute secrecy, and the initiation into this club was challenging. Unlike other clubs, our method of operation required total openness in regard to prime fishing locations on Truman Lake, with occasional references to specific flooded trees that nice fish were pulled from, trees that we refer to as “fish houses”. You must be able to produce, quite literally, hundreds of crappie jigs in a wide variety of colors, with a fair measure of them custom produced by a certain jig maker, Selina Wheatley, who lives near Truman Lake (Rocky Top Jigs). You must be able to recall, with accuracy, incidents involving stepping in styrofoam minnow buckets, lost glasses and hundreds of really big fish that broke off at boat side. You must have certifiable experience laughing to the point of a coronary, at the antics of a partner who has suddenly found himself thrashing about in the cold, April water of Truman lake while attempting to do something that is fishing related. If you do not have the capacity to smile broadly, with tears running down your cheeks at the sound of a transom lapping into the lake at first light, this club is not for you. If you cannot dress a crappie, from first cut to pan ready fillet, in a matter of 30 seconds, membership will be denied. You must also have a working relationship with the G. Loomis customer relations department , to facilitate the replacement of broken rods. Finally, if prevarication is required to make a fishing related point, you must back your lying partner without hesitation. These are some incredibly high standards, folks, and the club is small.

The club is named after Hogles Creek, a nice Truman Lake feeder creek, located at the confluence of the Osage and Pomme de Terre arms of the lake. This creek is close to most tournament start locations, and possesses a flooded five acre hedge tree thicket that is both hard to fish and full of tournament fish. My partner, Ralph Biele, and I have enjoyed money finishes on many occasions out of this hedge thicket. It is a beautiful creek, but can be tough to fish, especially when the water is other than at normal pool. It seemed like the perfect creek to name our club after. Ralph and I, as well as my brother-in-law, Dennis Wilson, love to fish Hogles Creek. Now to the point.

The Hogles Creek Jigmasters is comprised of two folks, Ralph Biele and myself. We have considered at least two other fishermen for membership, but never got around to formally voting on them, Lee Plunkett and Dennis Wilson. At our next formal meeting, we are going to propose them for membership and vote on their acceptance. I suspect they will win approval. The picture below is a team picture of the Jigmasters. 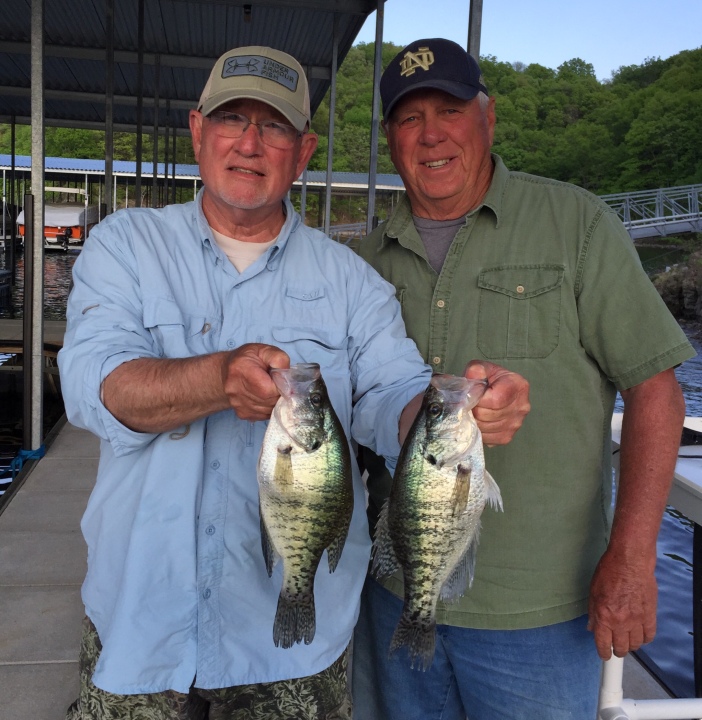 There you have it. The history and standards for membership in the most exclusive crappie fishing club in existence. For me, it satisfies the need we all have to belong to something…..as I mentioned, I am not much of a joiner!