Opening days are magic. There have been numerous articles written about the opening days of virtually every sport or activity in America, but in rural Missouri, there is a good chance that when you hear these words, the speaker is referring to the firearms deer season. Not so long ago, opening day of deer season found me sitting somewhere in the deep woods after a pre-dawn walk in, keenly attuned to every sound in the timber around me. A woodpecker sounds like a jackhammer and your own heartbeat resonates with every quiet breath. The anticipation is palpable as you slowly scan the woods for the smallest sign of movement, being ever so careful to not telegraph your location to the critters around you. I can remember bone chilling mornings and cool starts to sweltering days, but mostly I remember just how beautiful our hardwood ridges and cedar glades really are.

My first opening day was in 1966. I was fortunate to enjoy this day with one of the best woodsmen that I have ever known. Don Hathaway still lives in Evening Shade, Missouri, just south of Ft. Leonard Wood in Texas County, a perennial leader in numbers of deer taken in November. Don is an unassuming Ozarkian who I have personally watched kill a flushing quail with a .22 rifle. It may have been a lucky occurrence, but it was an intentional shot that left me speechless, as I blasted away with the new Remington 1100 shotgun that I had purchased with my earnings from a early career as a food packing and transfer specialist, a job title adopted to avoid telling the girls that I was a bag-boy at the Commissary on Ft. Leonard Wood. I managed to scatter 3 ounces of shot over a pasture, with none of it finding the feathers of a flushing bird! On this cold morning, Don deposited me near the end of aptly named “Long Hollow” where I waited for first light. I was relying on that same shotgun and a 1 ounce Remington rifled slug when a yearling buck nearly ran over me. An offhand shot at a distance of 50′ or so dispatched the little guy, the shot alerting Don that I had shot or shot at something. He soon appeared and slung the little buck over his shoulders and we walked out. You would have thought that I had just topped the Boone and Crockett record books! I was now a deer hunter. Don quickly field dressed the buck, relying on a sharp pocket knife and hatchet, hung it to cool and we adjourned to a VFW for pancakes, sausage and the camaraderie of fellow deer hunters all jabbering away as they warmed themselves with strong black coffee before heading back to the timber. These folks were Ozarkians, no pretense, no nonsense and purposeful men. More magic.

There were many more opening days for me in the years that followed, interrupted only by the US Army. As I write, I am under the watchful gaze of a very nice buck that was taken on the Dave Cook farm near Falcon, Missouri, not far from the Gasconade River. Dave and I worked together when I was assigned to Troop D and this farm was his old home place. A hastily erected stand built the night before the season opener with scrap lumber was my perch on a very cold, windy, opening morning. I had located a scrape the day before and thought the location ideal for seeing deer. The buck sauntered into rifle range soon after first light and I dispatched him easily from the stand. His strong heart carried him 30 yards or so to an enormous brush pile that he jumped into before dying, resulting in a considerable effort to get him out of. This bruiser weighed 200 lbs., field dressed, and provided me with one of only two mounts that I have kept through the years. It was another memorable hunt on a beautiful timbered farm in central Missouri. There were five hunters invited to hunt Dave’s property and at noon there were four deer hung from a tree in the old house’s yard to cool. Another magic experience.

I enjoyed a number of opening days hunting on Ft. Leonard Wood, a deer rich military reservation that adjoins Texas county near Evening Shade. My High School buddy, David Strang, his father Col. Tom Strang and I spent many mornings behind Ballard Cemetery, a location not far from the airport. The cemetery was a virtual textbook relative to the history of the tough folks who settled this country many years ago, with graves dating to the early 1800s. We have taken a good number of deer from the ridges behind this cemetery, ridges once populated by Indians who have left behind archeological sites that we were careful to not disturb. Among the many sounds on cold mornings, with just a little imagination, you could hear the Indians quietly slipping along these same ridges harvesting game for their villagers. The military reservation required the use of shotguns only, loaded with rifle slugs, and the shots were usually very close. A few years ago, I sold an Illinois State Police surplus shotgun, equipped with an open choke and iron sights, that I relied on when on the reservation. I should have kept the shotgun, a reminder of the wonderful hunts near Ballard Cemetery.

Late yesterday afternoon, I noted numerous orange clad hunters moving around, each anticipating the opening morning that is upon us. I could feel their anticipation and I certainly wish them a successful and safe hunt today. I have been tempted to join them, but arthritic hands and feet that won’t support the walk in and drag out have reminded me that my deer hunting days are most likely behind me. The memories are vivid and I will always respect the sacrifice of the critters that I have killed over the years. I have not looked down the barrel of a hunting firearm in several years, preferring to work a pool on one of our beautiful rivers or lakes instead, attempting to fool one more fish for the deep fryer. I will always view hunting as a noble sport. The ethical pursuit of game and appropriate consumption of the critters taken is a wonderful pastime and tradition. 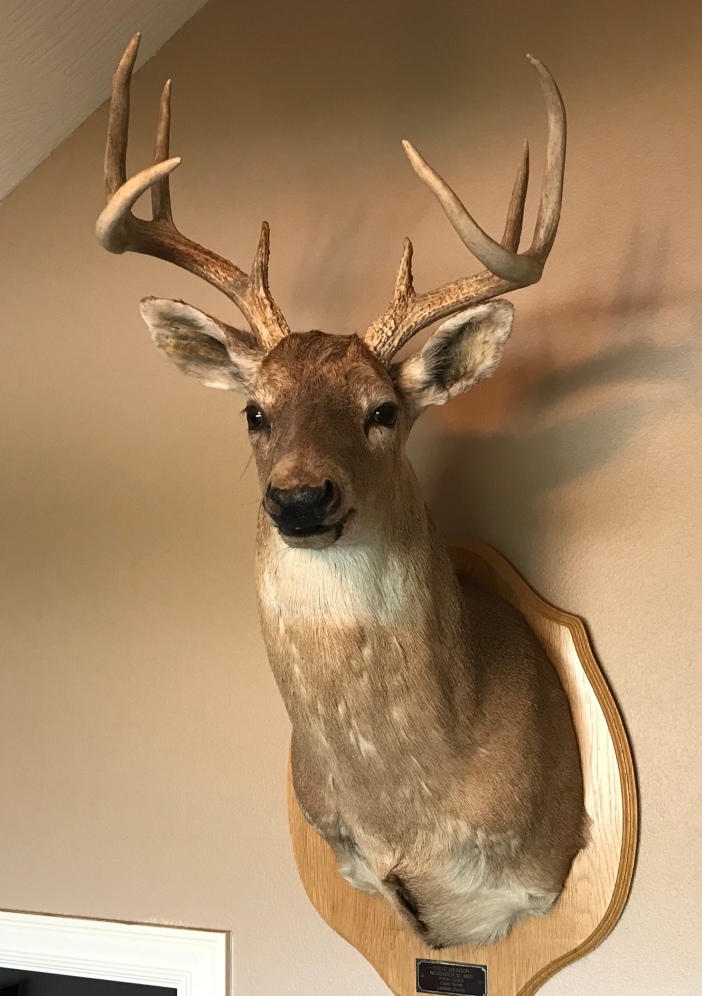 Today is opening day and this morning I have relived a number of hunts from the comfort of my office desk chair. I have taken the time to again thank the bruiser on the wall behind me for the terrific hunt on November 10, 1990. The scars on his neck are a clear indication of his strength and dominance before he fell in front of my rifle.

Thanks, big guy, for the memories!